As GameStop plunges, Volkswagen’s 2008 short squeeze gives an idea of how painful it will get

HomeFinanceAs GameStop plunges, Volkswagen’s 2008 short squeeze gives an idea of how painful it will get
/ off
/ CSFX

As GameStop plunges, Volkswagen’s 2008 short squeeze gives an idea of how painful it will get 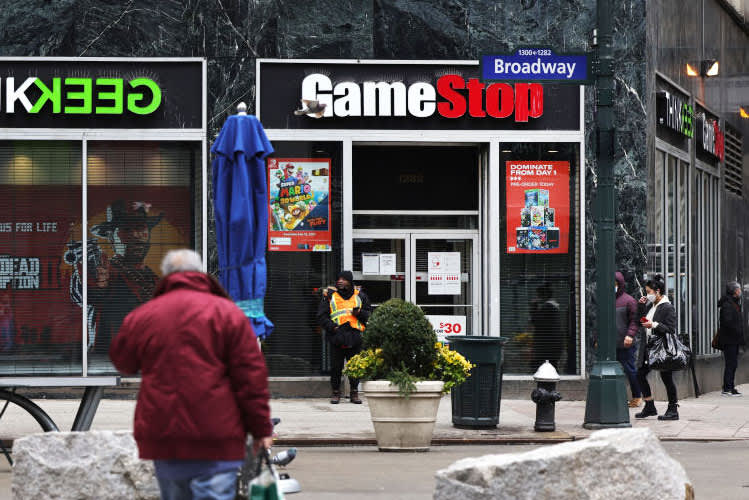 People walk past a GameStop store in Midtown Manhattan on January 27, 2021 in New York City.

In October 2008, the German carmaker saw its Frankfurt-listed shares more than quadruple in two days, briefly becoming the biggest company in the world.

The rally was initially triggered by a surprise announcement that Porsche had boosted its VW stake, which sent a slew of short-selling hedge funds rushing for the exit.

Last week, shares of the brick-and-mortar video game retailer soared 400% in wild trading as a band of retail traders, who coordinated on Reddit’s WallStreetBets forum, drove the stock price up by taking advantage of an elevated level of short interest in the name.

Now that the GameStop mania has started to unwind, will the stock follow Volkswagen’s path on the way down?

After Volkswagen’s peak on Oct. 28, 2008, shares fell 58% in four days, and a month later the stock was down 70% from its top, giving back most of the squeeze, according to FactSet.

So far for GameStop, the stock tumbled 30.8% to $225 apiece Monday from Friday’s close of $325. Shares dropped another 40% in premarket trading Tuesday, set to bring its two-day losses to more than 50%.

“The classic pattern of past squeezes include a quick rise, and a quick fall,” said Lindsey Bell, chief investment strategist at Ally Invest. “Squeezed stocks can move violently for no reason, and the tide can turn quickly. And when the squeeze is done, everybody tries to sell at the same time.”

Short interest in GameStop as a percentage of shares available for trading dropped to about 53% from over 110% a week ago, according to data from S3 Partners. So there are fewer short bets to cover to keep fueling the squeeze. Trading volume also fell sharply on Monday as the retail momentum slowed down.

“Both fundamental and momentum short sellers have found opportunities and price exit points to trim their positions in the face of these losses as the GME short squeeze is in full force,” said Ihor Dusaniwsky, S3 managing director of predictive analytics.

Short sellers borrow shares of a stock at a certain price in expectations that the market value will fall below that level when it’s time to pay for the borrowed shares.

However, when the stock jumps sharply higher, it forces short sellers to buy back shares in order to limit their losses, which leads to a so-called short squeeze.

“All squeezes like this end the same way with many times the stock just going back to where it started its flight at,” said Peter Boockvar, chief investment officer at Bleakley Advisory Group.

Back to where it was?

As the speculative mania ends, share prices should eventually come down to a level that reflects the company’s health and fundamentals. The jury is still out on whether GameStop can revive its struggling mall-based video game business in the age of streaming and internet.

“Can GameStop adjust their business model to allow for streaming games? Can they close some of their stores to become more cash flow positive? These are all questions we are waiting to find,” said John Davi, founder and CIO of Astoria Portfolio Advisors.

Netflix is a good reminder that just when you think a company has an out-of-date business model, things can quickly revert, Davi said. Netflix, once a DVD-by-mail service, managed to turn itself into one of the biggest streaming companies in the world.

“Reminder that NFLX had several 50%-80% drawdowns before becoming the company it stands today,” Davi said in an email.

Some GameStop investors grew optimistic after activist investor and Chewy co-founder and former CEO Ryan Cohen joined the company’s board, hoping he could drive a change in the strategy.

Subscribe to CNBC PRO for exclusive insights and analysis, and live business day programming from around the world.

JPMorgan Chase told workers that it will pay for travel to states that allow legal abortions, according to a memo obtained exclusively by CNBC.

JPMorgan Chase, one of the largest employers in the U.S. financial industry, told workers that it will pay for travel to states that allow legal abortions, according to a memo obtained exclusively by CNBC.