HomeCryptocurrency NewsNo rest for bitcoin on the weekend as it roars to $57,000
/ off
/ CSFX

We’re at the point of the bitcoin rally where distant relatives call me up and ask if they should buy it. That’s a sign that we’re at least in the middle-innings of this rally. When they’re calling me up and telling me to buy it that’s the time to sell. 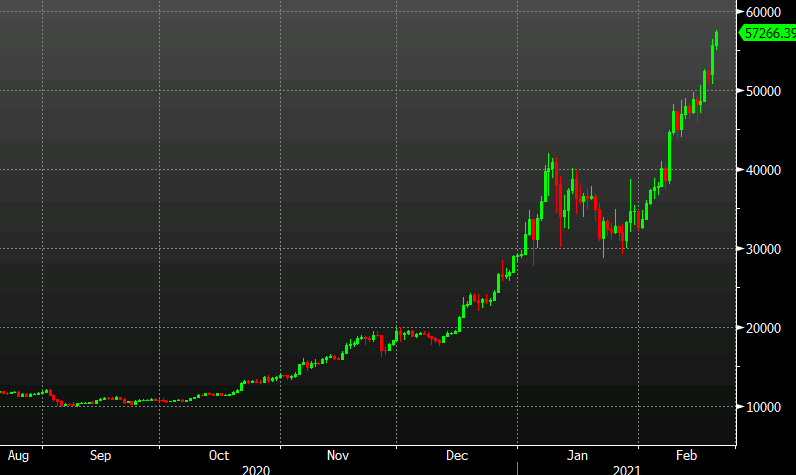 On Friday, I wrote about the incredible success of the launch of the first Canadian ETF on Thursday. It was the highest-volume ETF in the country on Day 1 and then traded another 40% more on Day 2. AUM is now up to $421m, which is still smallish in the bitcoin universe but it’s a sign that a US ETF will be very well received (and it’s coming).

I think the trade right now is to HODL at least until the US ETF launch. In the 2017 bitcoin rally, it peaked just as bitcoin futures were launched.

Invest in yourself. See our forex education hub.

Bitcoin continues its wild swings between $29-31.5K. By the end of the day on Tuesday, it had moved sharply back to the upper end of the range, but Wednesday began with a new dip, temporarily falling below 30K. Overall, bitcoin adds 2.7% over the day and has lost 4%...

High risk warning: Foreign exchange trading carries a high level of risk that may not be suitable for all investors. Leverage creates additional risk and loss exposure. Before you decide to trade foreign exchange, carefully consider your investment objectives, experience level, and risk tolerance. You could lose some or...